Hide Not Thou Thy Face is Published.

It's with great glee that I can announce that my latest anthology Hide Not Thou Thy Face was published on the 2nd November. Like the preceding four collections, it contains a number of short horror stories, some to make your squirm, others to make to chuckle and a few to hopefully make you dash out and invest in the Sam Spallucci books. 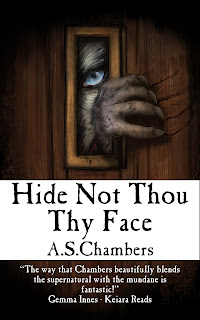 I'm not going to waffle on about it toooooo much here as there are details and links over on my website: www.aschambers.co.uk. So please please hop over there and check it out.

What I am going to do, though, is give you a glimpse into the one of the stories.

As most of my readers know, I am a huge Mike Oldfield fan and quite often have his music playing when I'm writing. One of my favourite tracks is off Tubular Bells 3 and is entitled Far Above The Clouds. If you've not heard it before. Watch the clip over on YouTube. I listen to this track a lot! I have it on repeat so much. So it was only right that I ended up creating what a story that I see in my head whilst listening to the music. I mentioned this a few weeks ago in the Mike Oldfield Fans group over on Facebook and I was immediately asked if I could share the story with them. I promised them that I would when the book was published, so here it is.

I hope you enjoy it!

Far Above The Clouds.

Rain lanced down from the blackened sky above, its stinging stair rods darting all over the man’s upturned face. He did not mind the thousands of little painful pinpricks. He didn’t want to move. He wanted to stay rooted to the same spot for the rest of his life. Let the rain pour down upon him for eternity. Let it bring minerals and elements that would calcify him, turn him to a pillar of stone.

But he could not look back.

He could not stay.

He heaved his hefty bag and pulled it up over his shoulder.

What the bag contained weighed heavy on his body, a burden. Only he knew what was within the faded canvas material. Only he had peered inside and seen the most wondrous things.

He had tried to share them with the people that he had left behind, down in the valley. He had told them of marvels and fantastical things. But they had not listened. They did not want to comprehend that their salvation, their redemption, was so close at hand.

So he would leave now, and keep his beautiful secrets to himself alone.

As for those who had not listened…

The man placed one foot in front of another and began his long walk up the mountainside, away from those who would not listen, did not care to believe, the light shale crunching under his determined footstep. Still the rain fell out the grey sky, dampening his hair, wetting his clothes, but that did not matter. All that concerned him was what lay at the very summit of the mountaintop, enclosed within the cave at its distant peak.

No one from down below ever ventured there. They were more enrapt with the tiny devices that they held in their fidgeting, nervous hands. They claimed that these gadgets set them free, informed them, liberated them. But the man knew different, knew the truth. They had become enslaved to the faceless ones behind the screens, the ones who watched and listened. The ones who controlled what it was that the people learnt, what they listened to, what they saw. No one knew who these nameless entities were, nor did they care. They possessed shiny, wonderful toys that promised things of wonder.

They did not perceive that they were actually slaves.

They had not listened to the truth.

So the man proceeded upwards through the all-consuming rain, his heavy bag of secrets slung tight over his aching shoulder. He journeyed up higher than anyone else that lived in the glittering city down below had ever been, to a place that he had not visited for many, many years. The air grew thin and the rain dissipated as he breached the cloud-line that guarded the distant summit, his Ultima Thule. He knew that, once he passed through this membrane of mist, there would be no turning back. He would be unseen by those down below, forgotten (if he were not already).

But he pushed on for he still had far to go, one footstep after another.

It was so terribly difficult to see as he walked through the cloud. He remembered his father bringing him up here, when times were simpler. “Concentrate on the path,” the older man had said. “One step at a time and everything will become clear.” And that was how the man had lived his life; concentrating on the path, one step at a time. That was how he had gathered his precious secrets and discovered the terrible truth.

The life in which those down below dwelt, was utterly pointless.

People woke in the morning. They stretched their arms and breathed in deep the air around them, but they no longer felt their hearts beat, their pulses surge. There was no excitement. There was no true joy, no love, no passion. The devices in their hands had removed all this away as they manacled themselves to the people’s wrists, drawing down their eyes to the whirling, swirling hypnotic screens.

This was a vague existence, not a life.

And those entities behind the screens continued to watch, feeding on the people, draining every last drop of soul from their withering bodies.

The people did not leave their houses. They sat and fiddled on their devices, convincing themselves that they were witnessing great wonders, when all they really gazed upon was a sham, a mockery of life. They did not see the rivers flow, the trees yearn upwards to the rain-giving clouds. They did not care for the cry of the new-born child, nor the laughter of the playful toddler. They were told that these things were irrelevant, annoyances. They were to be shunned, parodied, despised.

But the man loved all these things and he mourned their loss.

The clouds parted and the man looked upwards towards his Ultima Thule.

It was a place of glory.

It was a place of sunshine.

He had passed through the veil of water, cleansed and refreshed.

He allowed himself a small smile, but he was not there yet. The steepest stretch of his journey lay before him and his bag of secrets was so very, very heavy, the worn canvas drenched in the purifying rain. However, he had travelled it before, so many years ago with his long-departed father. They had travelled up as his loving pa had waxed lyrical about what lay ahead, at the very summit, deep in the cave. An incredible thing that no one else knew about.

From a time that the people below no longer believed in.

The man felt the strain of his secrets weighing heavily upon his back and he wished that it had not come to this, that he had been able to share them.

But no one had listened.

They had mocked him.

They had scoffed at him.

They had ignored him.

They had thrown insults at him and cast him out, before returning to the dire existence that they so craved.

So, he knew that he had to perform the task ahead of him, enter the cave that his father had discovered and do what must be done.

As he reached the summit, the sun started to descend and he saw glimmers of light pricking their way through the clouds as the people down below turned on more and more of the technology that controlled their little lives. He looked up and saw the heavens above, a vast wide sea of darkness, dotted with waves and islands of luminescence that would not be visible to those down below. As their harsh, vicious lights scraped away all subtlety and restful night, they would be imprisoned in a false day. They would not rest. They would not surrender their weary bodies to a deep, refreshing slumber. They would toss and turn in their flimsy, creaking beds as the bright lights wormed their way in through their inefficient curtains. They would awake in the morning, tired, grumpy and annoyed before ignoring those around them on their way to work by plugging themselves into their little devices and convincing themselves that this was how it had always been.

And it wouldn’t be once again.

The man reached the plateau at the top of the mountain, far above the clouds and he walked into the comforting darkness of the small cave that was situated atop the peak. He needed no light for there was nothing there over which he could possibly stumble. It was an empty room, containing one solitary item, and he knew exactly where to locate it. He just walked with his hand outstretched until it located that which his father had shown him so many years ago.

His hand clasped around the cold, metallic object, its grip perfectly moulding to his welcoming hand.

And, with not the slightest bit of hesitation, he thrust the ancient switch downwards.

The bells rang out from the mountain top. Over and over they rang as the arcane device cranked itself into life. They were the warning chimes, heralding a new era.

The device rose, slowly into the clear night sky above the sonorous cacophony and the man felt an insistent thrumming from far below his feet, as if the mountain were alive and was preparing itself to speak. Carefully, he traced his steps back out of the cave and looked up at the device, now tall and erect above the summit, its scaffold reaching up to a new world as the rhythmic pounding increased. The man sensed the momentous energy building up far below, from the machines created by those who had gone before, who had suffered the same fate as those who once again had fallen slave to the technologies they had created.

“It’s an ongoing cycle,” his father had explained to him, all those years ago, “one which can never be truly stopped.”

But the man was trying. He really was.

His hair stood straight from his head and the air tasted of oiled steel as the great device charged itself with its godlike power.

He imagined the people below pausing in what they were doing on their little devices and listening to the sound of the tolling bells chiming from high above, wondering what on earth it could be. They would have no notion of what was to come.

Then the machine’s noise crescendoed and the man felt a great wave wash past him, out to the people below in the illuminated city where they dwelt, trapped in their technological prisons.

And one by one, the lights fell dark.