To quote a certain musical about a certain guy with a certain technicolour coat, way way back many centuries ago, not long after the Bible began, or to be more precise, somewhere around 1987, I was sitting in a dull classroom awaiting the beginning of an even more dull English lesson. I had accepted my fate and was readying myself to sit with a fixed stare on my face whilst my teacher whiffled on about which author was their fad of the moment. I would practice one of my usual endurance tactics of counting cracks in the ceiling or spots on the face of the teenager next to me.

However, a few minutes before the teacher walked in, something was to happen that changed, not only the next hour but the rest of my life. 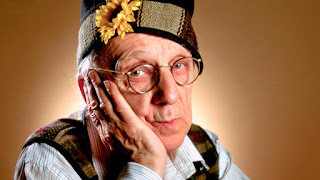 One of the few guys who I actually considered to be a friend plonked himself down to me and said, “Billy! Billy! Gruts for tea!”

Now, this in itself was nothing really new. Steve was known for exploring all things relatively random, but that day I found myself somewhat intrigued so I asked him what the hell he was on about.

He had been rifling through a selection of his dad’s tape cassettes and found one by an “old Scottish guy.” The first track had been a short story which consisted of a conversation between a father and son talking about gruts.

I asked the obvious question: “What are gruts?”

Steve said that he didn’t have a clue. He guessed that they were food of some description. He fished out the tape and I listened to it. I spent the next hour contemplating what was to be my epiphany on writing. Gruts For Tea by Ivor Cutler is, for me, still one of the best pieces of short-form writing that I have had the pleasure of reading. It simply tells the story of a son complaining to his father that he hates the wretched food that his father consistently provides from foraging in the High Wood. His father tries to convince the son that it is the best they can get, but this is not good enough for the youngster as he has reached the end of his tether.

On the face of it, Gruts For Tea is a surreally humorous tale, which makes the reader chuckle at the sharply honed and precise wit every time, especially when read by Mister Cutler himself. And that was how I saw it then as a teenager. It showed me that writing does not have to be what everybody else does or what everybody else expects. The author just needs to sit down and write what is there. They need to let it flow. Don’t hold anything back, fearing what others will think. Be a true artist and let whatever is bubbling around in your head roam free on the page. And this was what saved my next hour as I sat and contemplated this very thing while my teacher prattled on about an author who meant nothing to me. In short, it set me on the path to where I am now as a writer.

However, Gruts For Tea, and indeed a lot of Mister Cutler’s work, has a much deeper level, and I think that this might be even more of a reason why they have endured with me. Tucked away in the levels of surrealism and dry wit, are comments on society and on relationships. We see people who are trying to live with cards that they have been dealt. Cards that the dealer knows are marked and uses to constantly win the game. When I read his works now, with the passing of thirty-five years or so, I still enjoy the humour, but I feel a melancholy that nothing has changed since the time that he wrote them. Working classes are still downtrodden; middle classes are still striving for prizes that they cannot ever achieve; the rich are locked in their ivory towers oblivious to the things in life that truly make us happy.

So, if you want to read works that will really change your life and make you question everything whilst doing so with a wry smile, then the late, great Mister Ivor Cutler is definitely for you.