So, no running this morning because my good, old, constant friend Mister Meniere's is in the driving seat. I'm all bells a-ringing in my ears and I'm swooping and swaying myself around the house as those little sacs of fluid bang together deep inside my head. 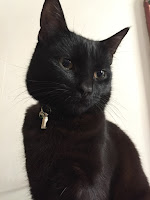 It's funny how something so small can cause such deeper repercussions. It's almost like an ant overthrowing an international bank. There's a domino effect of symptoms that lead onwards to the ultimate conclusion that today is just not going to happen.

And what, may you ask, caused this exacerbation of my lifelong condition? Well, it is small, has four feet and a tail, is covered in soft, black fur and answers to the name of Schroedinger.

Yes, I was bounced on at two in the morning by an over-exuberant kitten. Now, if this had been, say twelve hours later, I would have been, “Yo, Kitty! Let's play.” However, in the supposed still of the night, his playful actions were less than welcome and resulted with said feline being shut in the dining room until sunrise and Yours Truly feeling like he had just gone twelve revolutions on a waltzer.

But, hey ho, Schrodie's cute and I always forgive him. It just means that today will see very little work achieved.