The weekend just gone saw Yours Truly in his natural habitat: the comic convention. I pootled down to Liverpool for its first ever MCM convention. The idea, as ever, was to introduce new readers to my books, sell fantasy figurines and have a fun time making new friends and catching up with existing readers and other traders.
However, I had a stowaway in my little Citroen Berlingo.

When I leave the snug safety of the protective cave that is my home, Mister M will always try to do his best to ruin the event. This weekend was no different. Setup for the convention was on Friday, so Friday lunchtime saw me driving down the M6 with bells a-ringing and stomach a-fluttering. I gave them the finger by turning the Pet Shop Boys up loud and singing along to some camp eighties' classics. 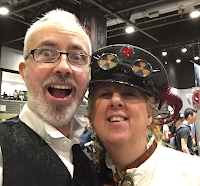 Mister M was not deterred so easily. After setup, all a tired Austin wanted to do was to crawl into his hotel bed and snore away the wee hours. At 2am Mister M said it was playtime. The rest of the night was spent listening to bells and voices stamping on my auditory nerves. So it was that a slightly haggard Austin had to appear bright and breezy on the first day of the convention even though, deep inside, he felt like curling up under his stall and hiding.

As the day progressed my emotional state declined and I started to question my whole career path as Mister M cackled with glee in the corner and at six o'clock I drove back to my hotel in an exceptionally bleak mood.

However, Mister Meniere's had failed to take into account one crucial factor in his plot to overthrow the happiness of Yours Truly: other people!

The next day saw me stagger into the convention looking like Death's great uncle Horace. The traders next to me chatted away and it turned out that they had felt shocking the day before too. They had been tired from travelling and the day had gone on far too long for them. Another trader came and said, “Hi!” then went and bought me a decaf americano which both warmed me and cheered me. 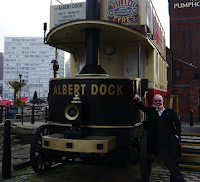 Then my readers came and visited me. With each praise of my books and each purchase of my latest escapade, Mister Meniere's was thoroughly thrashed into submission.

By the end of the day, I was somewhat weary but also bright and cheery. As I packed up and headed home I couldn't help but whistle happily to myself.

So, to all the folks who unknowingly aided me in my silent battle in Liverpool, all those who came as unwitting knights in shining armour, I say, “Thank you!”