Had a really good run this morning even though Mister Meniere's was trying desperately to convince me to remain in bed. He thought he had achieved a cunning victory over me this weekend when he prevented me from going to see Deadpool on Sunday and his hopes of hitting me around the head with a large haddock were running high. However, both yesterday and today I managed to drag myself, albeit somewhat unsteadily, out of bed and today I even managed to reap a reward with an increase in my running distance. 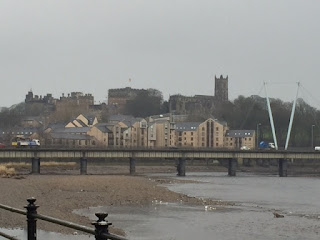 I was also treated to this nice shot of the River Lune winding its way to the millennium bridge.
Normally, Lancaster’s river is a fairly lazy beast – it slouches down low in its bed and protests when it gets assaulted by flocks of swans. However, just before Christmas last year, this sleeping monster rose its head and burst its banks. A feat quite unbelievable when you look at it in this picture yet something which the city is still recovering from with many businesses still closed.


I see my Meniere's rather like the River Lune. I'm always aware of its presence. It's there, trickling away in the background with my tinnitus happily jangling and jingling in my inner ear. Then sometimes there's a splash and I suddenly feel dizzy or nauseous for no particular reason. And other times there is a torrential downpour which causes it to burst its banks and flood my senses with an overload of saturated information. I collapse in a heap and retreat to the safety of my bed for a number of days.


So, when this inundation catches me off guard from time to time, I just pile up the sandbags and hunker down in the knowledge that given time the floodwater will recede and life will eventually return to what I consider to be normal.

Don't forget, you can catch up with my writing bits and pieces ate the following places:
My Website,
Facebook,
Twitter,
Amazon,
Goodreads.
Posted by A.S.Chambers at 01:31